Electricity is a fascinating invention. If it wasn’t for electricity major feat in humanity may never have been achieved. Our daily lives are constantly affected by this fantastic invention and we will forever owe the person who discovered it.

I hear you ask now ‘who created electricity’. The history of electricity dates back to 2750 BCE where the ancient Egyptians were aware of ‘shocks’ from ‘Electric Fish’ which was aptly named ‘The Thunderer of the Nile’.

Benjamin Franklin was really the pioneer of electricity being discovered and then created. We’ve all heard of Franklin’s famous ‘Kite Experiment’ in which he flew a kite in the sky to prove electricity existed in the form of lightning. Indeed the lightning struck the kite and as Franklin had attached a metal key to the end of the kite the electricity was able to flow to it. Thus giving him a big shock! This was in 1752.

Scientists then studied electricity and its forms for hundreds of years, many people pioneering new projects that thrived off electricity. Thomas Edison creating the first light bulb in 1879.

How Is Electricity Created?

The creation of electricity is no mean feat at all. It requires control and a very high attention to detail. The slightest mishap could result in disaster. The main way to create electricity is through the burning of fossil fuels. The result of this is steam. This steam powers a huge turbine which then spins a huge magnet inside of a copper wire coil. Creating heat energy.

This heat energy converts to mechanical energy which then converts to electrical energy through the use of a generator. Now they have this energy ready they have to now distribute it in a controlled and safe way. It now flows from the power plant through rather large and lengthy power lines. The way it does this is through the use of a transformer. It raises the pressure of the electricity so it can flow quickly through the power lines. At its highest it can reach 756,000 volts(this is extremely high and would reduce any thing in it’s path to dust).

The next step is a substation. These are the small gated stations that contain smaller transformers which step down the voltage to between 2000 – 13,000 dependent on the distribution area. This electricity is then ready to be sent to your home and light up your house, power your tv’s and charge your phones. It is sent underground as this is the safest way of distribution – entering a transformer box which now converts the electricity to in the region of 120 and 240 volts. This is still quite high and will hurt when passing through your body. From here the electricity is distributed through a meter which records your uses and sends information to the provider. Thus you receiving a bill every quarter. It is then distributed throughout the house to lights, appliances, sockets etc.

Below you’ll see a diagram showing the simplified process. 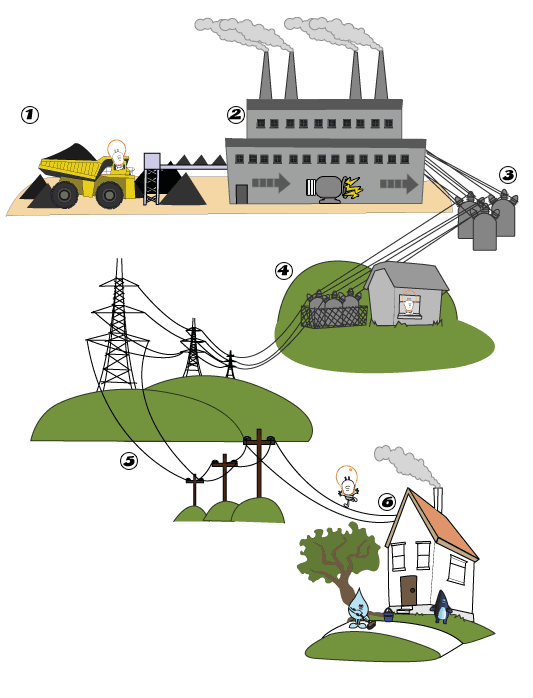